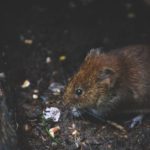 Since the 1960’s resistance to mouse and rat baits (anticoagulants) in Norway rats (Rattus norvegicus) and house mice (Mus domesticus) has been identified in the UK. We have therefore been victims of this phenomenon and subsequently also become world leaders in our understanding of it. Generational resistance created through genetic mutations has allowed rodents to evolve at an unprecedented rate, to create new generations of super rodents that can readily ingest rodenticides – rat and mice bait – to no ill effect.

The original rodenticide, warfarin, was primarily a drug widely used in medicine as an anti-coagulant to prevent the build-up of harmful blood clots. It works through inhibiting a protein called VKORC1. This protein turns on our ability to produce vitamin K, which is essential for clotting. An overdose of warfarin was observed to cause fatal internal haemorrhaging, and it was this quality that led to its development as a rodenticide during the 1950s. However, it was noticed within a few years that warfarin was proving to be losing its effectiveness, and scientists observed that rodent populations were quickly evolving traits to survive the poison, in many different parts of the world. Realising that there was an issue with house mouse resistance to first generation anticoagulants (FGARs) – warfarin, chlorophacinone and coumatetralyl, scientists next went on to develop the second-generation anticoagulants (SGARs) – brodifacoum, bromadiolone, difethialone and difenacoum in the early 1970s and recommended the use of the FGARs to be avoided.

So what does this all mean to the home or business owner? Simply put, if you have a rodent issue and want a successful outcome you may need to call in a professional with access to the SGARs and other restricted products. ECHA (the European Chemicals Agency) have also required that the maximum level of active ingredient for general public use must be reduced from 0.005% to 0.003% (50 parts per million (ppm) to 30 ppm). In practical terms this will mean that the mice will have to ingest many feeds from amateur bait before an effect (if any) is seen.

So what else can we do to protect our homes and businesses? As part of any pest control programme LANDGUARD offers free advice on the use of habitat management, including the removal of harbourage, denial of access to other food sources (such as food waste) and where possible the prevention of ingress into structures. These steps are often vital to a successful outcome.

Please feel free to call the team today for further advice or to arrange a no obligation survey.